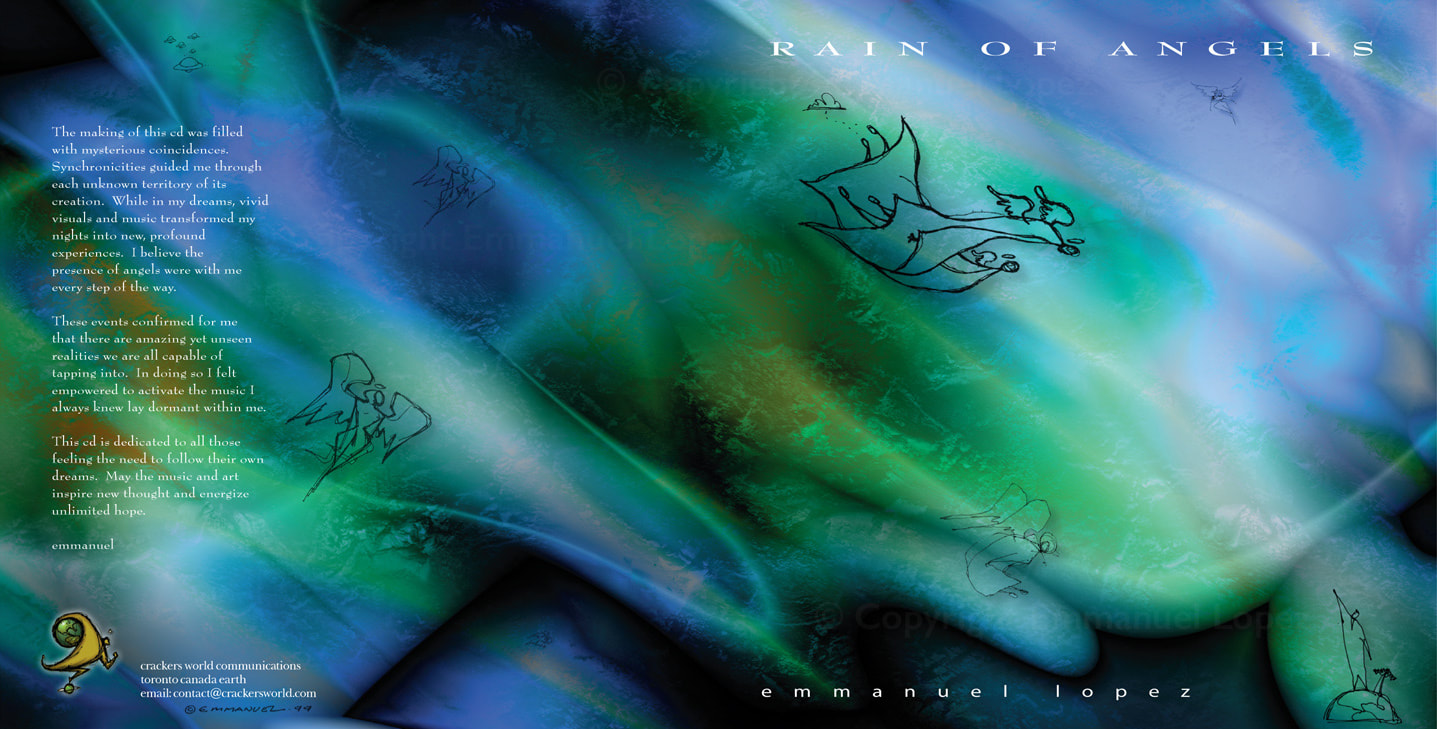 “I hear music through vibrations and Rain of Angels resonates throughout my body transporting me to a far-away serene place!”
Vanessa Vaughan Deaf Canada Today

The Rain of Angels CD was released on November 24, 1999 and is like a movie soundtrack for when times are tough and you are feeling alone. I created these songs to lift myself up during times of depression and feeling stuck in life. I also had the vision that this music would comfort others going through difficult times. After composing and recording the songs I then spent months creating the album’s colourful artworks to accompany the thought provoking spiritual and metaphysical concepts.

Each song title represents an idea I was fascinated with during the early 90's like angels, UFO's, chakras, ancient prophecies and life beyond the physical. My spirit was so open during this period of my life that I felt guided by unseen energies to create this album. Despite not being able to read music I was compelled to share these mind-opening concepts through songs. So I trusted in the universe and each day I was mysteriously and synchronistically guided to the right people and the right musical equipment to express the music and lyrics that was flowing freely and easily from my imagination, through my fingers and onto my keyboard.

During this time I was inspired by books like The Celestine Prophecy, Bringers of the Dawn, Out on a Limb and Saved by the Light. They opened me up to exploring my spiritual life and to the belief that angels were real, life on other planets and dimensions exist and that I am never alone even in my darkest moments. I hope my music in some way fills you with hope and activates your imagination.

NOTE: This music CD is currently unavailable but will be available in the near future along with mp3's online.

1) The Dream (Instrumental) - 1:10 min.
This track was inspired by lucid dreams I began experiencing almost every night since December 1994. My dreams were so vivid! This instrumental was also inspired by a phone message my friend Sally had left on my answering machine. Her shining enthusiasm is preserved forever on this track! Sally's excitement mirrored my own thrill of my lucid dream experiences. I believe dreams are one way that messages from the universe come to us for questions we want answered in our waking life.

2) Out of Body Experience - 4:31 min.
Some of my lucid dreams eventually elevated to profound experiences where I became fully aware I was physically out of my body and on some other dimensional plane that looked and felt like the real world. When I realized I was having out of body experiences (OBE) I was so amazed that I wrote down many adventures I had in a notebook I had next to my bed. This playful song and lyrics was my way of communicating the fun and thrill these nightly journeys were for me!

3) 2012 - 5:29 min.
Throughout history there have been many prophecies and predictions made about our future. For some deep reason I was drawn to the ancient Mayans who predicted that the earth would experience a dramatic shift in the year 2012. They also predicted something profound would happen on July 11, 1991 and on that day a silvery flying disc was video recorded by many sources during the eclipse of the sun. Since I love Sci Fi movies I was inspired to write this song and tell these compelling stories. And though some may interpret Mayan Prophecies as doomsday stories I wanted to write about the optimistic bright future I choose to believe in for the song lyrics. See music video below.

4) Crop Circle Suite (Instrumental) - 2:50 min.
As an artist I was enthralled by the beautiful and massive crop circles being photographed in the UK during the 90's. This phenomenon occurred around the world with theories of their creations stemming from natural occurrences to extraterrestrial influences to man-made hoaxes. Whatever their origins they inspired my imagination and this whimsical instrumental with their unearthly beauty.

5) Rain of Angels - 5:46 min.
I was feeling lonely and depressed when I wrote this song but I was also aware that I had guardian angels watching over me. During the time I created this song I was dealing with undiagnosed clinical depression and seasonal affective disorder. I was actually practicing music therapy without knowing it and writing and performing this song went a long way to lifting me up with hope. At the same time I did feel spiritually guided in creating this song as well as all the music on this album. I do believe I was in the presence of angels the entire time! See music video below.

6) First Contact (Instrumental) - 5:02 min.
This instrumental is actually a slowed down ambient version of the next track, Power Hug and was written as a short, quick 5 minute meditation. It contains specific notes that resonate with chakras (energy vortexes) within our bodies and help to re-energize ourselves when feeling low moods or stress. The note F resonates with the heart chakra and is sustained for most of this song to help open one's heart to more compassion, empathy and love. I was first inspired by the term chakras from Shirley MacLaine's book Out on a Limb and studying them became a big passion.

7) Power Hug - 4:44 min.
This track was actually the first song of this album to be written and was a way to express my excitement of discovering a new spiritual part of myself. The lyrics reference my vision of a unified, loving world, concepts that our DNA contains hidden powers and abilities and my obsession for UFO's at the time! And as mentioned in the First Contact instrumental the musical notes of this song resonates with specific chakras within our bodies such as the note F that resonates with the heart chakra for creating deeply, loving hugs. The title Power Hug was also inspired by meeting and hugging Dannion Brinkley the author of Saved by the Light. His hugs felt so powerful that I believed his heart chakra was profoundly energized since he was hit by lightening twice and survived! To this day I love giving and receiving power hugs!

8 Remember… (Instrumental) - 1:25 min.
This track represented the metaphysical idea of having past lives and that we can tap into past experiences and learnings to help us in the present and our current mission in life. This was written as a quick meditation to quiet the mind, travel back in time and access important memories needed to move us forward in life.

9) Where Angels Kiss The Air - 6:17 min.
This track reflects the playful side of my spiritual learning in the 90's and the lyrics are loaded with references to the spiritual books I'd been reading at the time as well as my earthly passions like french fries, chocolate and TV shows I loved like Seinfeld and The X-Files! This song also expressed my desire to find a loving woman to share these passions and spiritual journey with. It's really a cosmic love letter to a woman & life partner I've yet to meet!

10) Time Capsule (Instrumental) - 2:31 min.
During my obsessive research of understanding my awakening in 1994 I ended up fascinated with ancient civilizations like Egypt and the Mayan cultures. Even mythical lands like Atlantis fired up my imagination with stories I'd read of Altantean surivors planting a time capsule message under the Sphinx in Egypt. This instrumental celebrates the possibility that a time capsule will be found some day. And I love the idea that when it's finally opened there would be a copy of my music CD inside! That would be so cool!

11) Spiritual Chocolate - 8:13 min.
This track was inspired by my love for chocolate and passion for chocolate martinis! So I wrote the most sensually and sexiest groove I could imagine and added my French friend Barbara's voice onto the instrumental. It also features a fantastic performance by musician Eric Mohr who played the warm vibes solo in one, magical take!

12) Rain of Angels Reprise (Instrumental) - 5:46 min.
This instrumental is actually the ambient synth pads underlining the title song Rain of Angels and meant to be a soothing, meditative piece. Even in this stripped down version I could still feel the loneliness and melancholy I was floating in when I wrote and performed it. And yet I still feel the warmth of angel wings cradling me in the music and making me feel safe and comforted.

NOTE: This music CD is currently unavailable but will be available in the near future along with mp3's online.